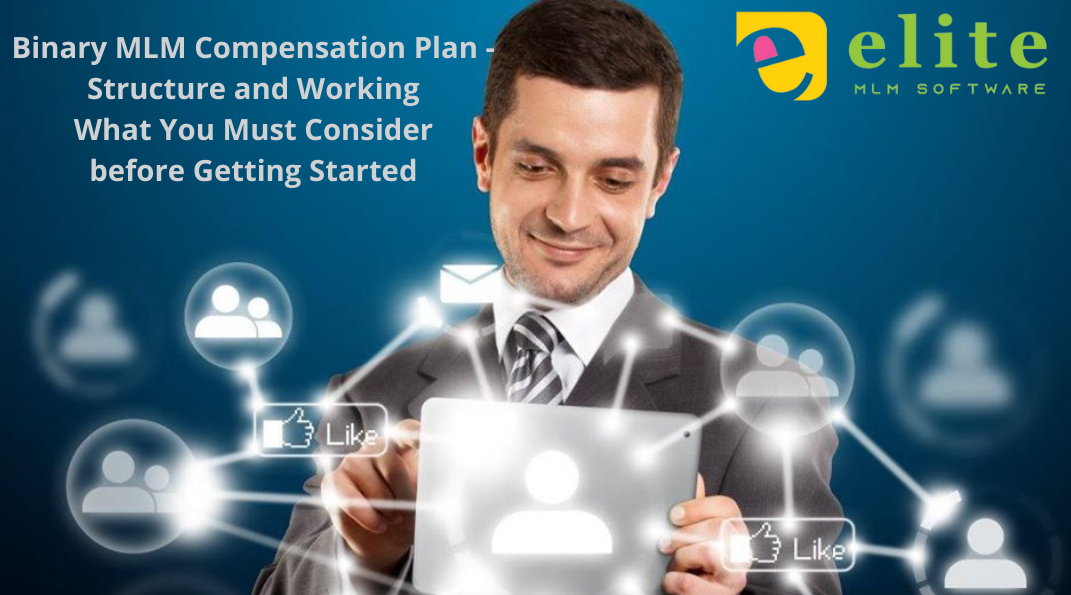 The binary MLM plan motivates both uplines and downlines to work harder, resulting in increased business growth. New Members are placed as downline members in the network, regardless of who recruited them and this process is known as spillover. A binary MLM compensation plan is used by the majority of MLM businesses to reward members based on their stronger leg.

Binary MLM plans are widely used in many MLM businesses. When new members are added to the left and right legs of a binary MLM compensation plan, the network grows like a tree-like structure. A binary compensation plan is relatively easy and simple to understand when compared to other MLM compensation systems. One member’s frontline is limited to two downlines (left and right legs) in a binary plan, but the depth is infinite. This means that in order to begin earning, each member has to recruit two new members and place them in their downline.” When a member recruits and brings in more than two members in the network, that’s where the spillover effect happens in the binary network. The ‘spillover’ aspect of binary is its most appealing feature. A Spillover can also be referred to as a spill network.

In a binary network, members are organized into a binary or dual-tree structure. Members of the network are divided into two legs in a Binary MLM plan. This means that in the network, each member will have two downlines. The idea is simple: as a member, one must recruit two people as their down line, who will be their right and left legs, respectively. On both sides, each will have its space.

On the other hand, a member has no limit to how deep they can go. At the same time, the number of your downline is limited to just two people on your frontline.

When you recruit more than two people, your subsequent recruitment will automatically take place at the next available location. To handle all of this, you’ll need good MLM or multi-level marketing software.

The Binary MLM plan offers excellent earning potential. And it is for this reason that the majority of MLM business owners prefer this MLM plan.

In the binary MLM compensation plan, a member’s possibilities of earning are extremely high. A member can earn commissions, bonuses, prizes, and awards in a variety of ways. A royalty commission is also paid to members. Which aids the network’s efficiency. There are many more plans and rewards in the binary system.

The binary MLM compensation plan is the most successful MLM plan in the history of network marketing. Binary plans can also help MLM business users and consumers build a large network and earn a lot of money. MLM owners can develop a power leg to promote the networking company. And MLM owners prefer to work with binary plans because they allow them to establish powerful network connections by allowing both down lines and up lines.

In a binary MLM compensation plan, the members of the network will get a small compensation, the uplines of representatives who make personal purchases or sales to consumers receive the majority of overall compensation.

The Matching Bonus is given to a person once they have completed particular activities that are beneficial to the company’s growth. Members are rewarded with a bonus if they meet a pre-determined goal within a certain amount of time.

The sponsor bonus is given to a person once they have completed particular activities that are beneficial to the company’s growth. Members are rewarded with a bonus if they meet a pre-determined goal within a certain amount of time.

The pairing bonus is the amount paid once you’ve completed the binary tree and earned the bonus depending on the sales of your downline members. The maximum pairing bonus will be determined by the plan you choose and the company’s rules.