You are here:
Binary Income Plan 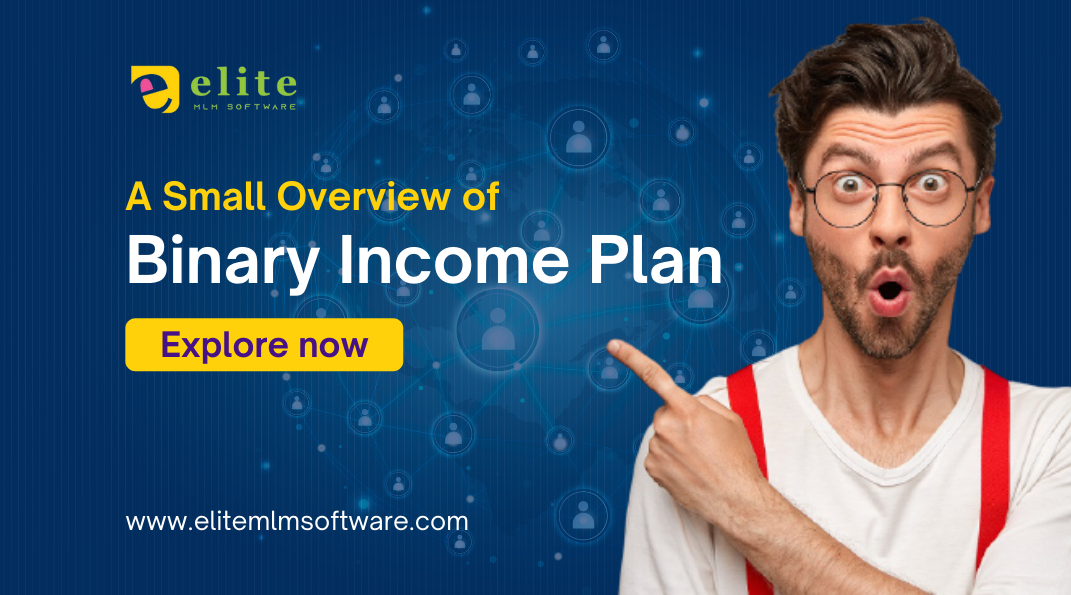 The Binary income plan is the most popular and well-known MLM plan among MLM firms, MLM company individuals, network marketers, and all other members interested in starting a new MLM business. The concept of the Binary MLM plan is built on the expansion of two legs of the network, one on the left side and the other on the right side. When someone joins the network, that particular member should refer a new member on the left or right side of the Binary Tree Structure, with one side referred to as the power leg and the other as the profit leg. This way the binary income plan grows its network in a tree-like structure in the network.

In Binary MLM Software the power leg develops when an existing tree member recruits a new member and adds them to the tree at the leaf position, whereas the profit leg grows when a member introduces for personal gain. Other criteria were also compatible with binary compensation sharing, such as the 2:1 assumption.

The binary income plan usually grows with two legs – Left and Right leg respectively. A member of the Binary MLM plan is only necessary to recruit two individuals under him, therefore the term “Binary.” The left leg and the right leg are the names of these two members. Each of these legs will then recruit two additional legs, and so on. To complete the network and earn commissions and bonuses, members of the network will add new members to their downlines. When a person recruits more than two people, one of the front-line members is immediately assigned. And spillover is the term for this. This makes it simple for new members to get started because they just need to acquire two new members to begin earning right away.

After that, the key issue is balancing the legs, as a member’s revenues are displayed by the weaker leg. So, just because a large number of individuals sign up under one member doesn’t mean that member will make a lot of money. It’s also possible that a member who all are placed under will make more money.

At any given time, the recruiting person has the option of choosing which leg to develop. That is, a team leader can determine which of his frontline members should be assigned to new team members. However, it becomes more difficult to balance the legs over time as some members develop their legs quickly while others lag. It is then the responsibility of the upline member to balance things out, which can quickly run out of control.

Members of the upline and downline profit from one other’s efforts. Any new associates are automatically assigned to one of these two groups after the first two downline members. As a result, one will gain even if the new associate is recruited by someone above other member. At the same time, if one of your subordinates recruits new associate in the network as a downline, it will be also benefit to the upline members of one particular network.

The most straightforward compensation plan of them all. Prospects can easily grasp the very simple concept of hiring only two members. Members can easily acquire new associates as a result of this.

In comparison to other plans, this binary MLM plan has a faster growth rate. This approach offers a lot of room for development because each member’s workload is divided into only recruiting two people at a time.

The binary income plan encourages both downlines and uplines to work harder, which leads to higher company growth. Members are distributed to downlines through a process known as spillover, independent of who recruited them.